Why Communion on the Tongue? Part I of II 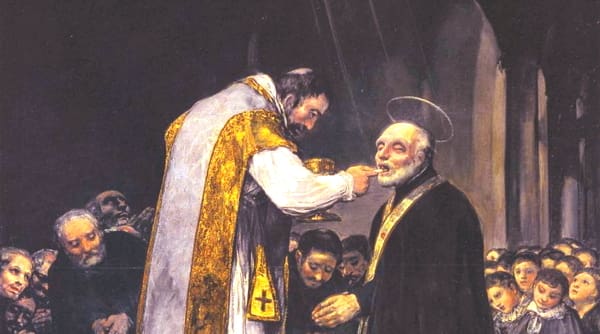 Why Communion on the Tongue?

Part I of II

Editor’s Note: Today we are pleased to introduce to you Christopher Carstens, Editor of the Adoremus Bulletin, and a wonderful addition to the cadre of authors on our site.  Please welcome him warmly and make him feel at home.

The “Sacrament of Unity,” the Eucharist, demonstrates great diversity. In its celebration, ritual families from Antioch, Alexandria, Constantinople, Armenia, and Rome make their own unique cultural contributions. Indeed, the “mystery of Christ is so unfathomably rich that it cannot be exhausted by its expression in any single liturgical tradition” (Catechism of the Catholic Church 1201).

Within these traditions, the faithful may receive Holy Communion in a variety of ways. In the Latin Church alone, legitimate options include the communicant’s posture of standing or kneeling. In addition, the minister may distribute the Blood of Christ directly from the chalice, by intinction (dipping the host in the Precious Blood), or—even if not customary for most Roman Catholics—“by means of a tube or a spoon” (General Instruction of the Roman Missal [GIRM] 245). The consecrated host can also be received in multiple ways, “either on the tongue or in the hand, at the discretion of each communicant” (GIRM 160).

Communion in the hand, while relatively new to today’s Latin Church, is acknowledged as an “ancient usage” by the Holy See (see the 1969 Sacred Congregation for Divine Worship’s Memoriale Domini, “Instruction on the Manner of Distributing Holy Communion”). The U.S. bishops, in their Vatican-approved norms on the distribution and reception of Holy Communion, invoke the oft-cited remarks of St. Cyril of Jerusalem (d.368): “When you approach, take care not to do so with your hand stretched out and your fingers open or apart, but rather place your left hand as a throne beneath your right, as befits one who is about to receive the King. Then receive him, taking care that nothing is lost” (see “Norms for the Distribution and Reception of Holy Communion under Both Kinds in the Dioceses of the United States of America” 41). Despite the “ancient usage,” however, and even within the boundaries of the current discipline, the Church has made clear that Communion on the tongue is the preferred practice. (Consider especially the entire 1969 text of Memoriale Domini, as well as Pope John Paul II’s 1980 Apostolic Letter Dominicae Cenae 11). The Church’s preference for Communion on the tongue is nearly always justified by notions of reverence, devotion, humility, respect, adoration, and decorum. And while Pope John Paul II acknowledges those “who, receiving the Lord Jesus in the hand, do so with profound reverence and devotion” (Dominicae Cenae 11), permission for Communion in the hand is accompanied by warnings of potential disrespect, profanation, weakening of Eucharistic faith, and indifference.

But more needs to be said about these connections between the manner of reception and potential reverence or abuse. Potential for abuse is often not sufficient reason to forego a valid option. Instead, a positive theology for reception of Communion on the tongue is more helpful. Why, for instance, might Communion on the tongue help one’s Eucharistic faith, increase devotion, and better express one’s love to Jesus in the Sacrament? Conversely, why does receiving Communion in the hand risk profanation, weakened belief, or signify a possible lack of Eucharistic faith? Indeed, I have received Communion in the hand many times and should like to think I am among those mentioned by St. John Paul II who receive “with reverence and devotion.” Similarly, reception on the tongue does not necessarily guarantee fidelity and a grace-filled spiritual life. Still: how can I more clearly understand the Church’s preference for Communion on the tongue and, more importantly, how can I benefit spiritually from this preferred practice?

Whether receiving Communion on the tongue, in the hand, or each way from time to time, every communicant should reflect upon how the outward manner of reception expresses and fosters his or her Eucharistic faith. In the next post, I’ll offer three reflections on Eucharistic Communion and why the Church sees Communion on the tongue as the more suitable manner to receive Jesus in the Blessed Sacrament. In the meantime, how would you relate the beauty, reality, and truth of the Eucharistic mystery to your own manner of reception?

Christopher Carstens is Director of the Office for Sacred Worship in the Diocese of La Crosse, Wisconsin, instructor at Mundelein’s Liturgical Institute, and editor of the Adoremus Bulletin.

Editor’s Note: In part II, Christopher Carstens will offer three considerations for receiving the Eucharist on the tongue.