St. Augustine: The Son of Such Tears 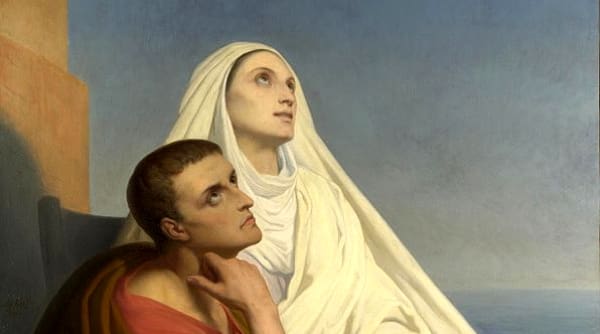 In terms of liturgical prominence, the Solemnity of Our Lady’s bodily Assumption into Heaven (on August 15th) clearly eclipses the remaining feasts of August.  That being said, August 27th and August 28th should also be days of special celebration.  For on these days the Church celebrates the memorials of Saints Monica and Augustine, respectively.

Born in the year 354, St. Augustine was enrolled amongst the catechumens while still an infant but was not actually baptized until the age of thirty-two.  As a teenager, St. Augustine went to Carthage in 370 where he dedicated himself to the study of the liberal art of rhetoric.  Reflecting on this part of his life, St. Augustine describes it as a rather profligate period.  Speaking to God in his Confessions, he writes: “…in my youth, I burned to get my fill of hellish things.  I dared to run wild in different darksome ways of love.  My comeliness wasted away. I stank in your eyes, but I was pleasing to myself and I desired to be pleasing to the eyes of men.”  One of these “darksome ways of love” certainly consisted of St. Augustine’s approximately fifteen year-long relationship with a concubine who bore him a son, Adeodatus, in the year 372.  Another had to do with his growing intellectual attachment to the Manichean worldview which involved many profound errors about God, the nature of evil, and other things.

While St. Augustine wandered astray in various ways, St. Monica, his mother, prayed for him and wept for him.  In addition, she even besought a bishop or two to reprove her wayward son.  In his Confessions, St. Augustine recounts one occasion when St. Monica begged an unnamed bishop, who was himself a former Manichean, to refute St. Augustine’s mistaken beliefs and to assist him in reforming his ways.  Not finding St. Augustine at the time sufficiently docile to receive well this much-needed correction, the bishop refused St. Monica’s request.  St. Augustine writes: “When [the bishop] had spoken these words, and she still would not keep quiet, but by her entreaties and flowing tears urged him all the more to see me and discuss matters with me, he became a little vexed and said: ‘Go away from me now.  As you live, it is impossible that the son of such tears should perish.’  As she was often wont to recall in her conversations with me, she took this as if it had sounded forth from heaven.”

St. Monica was right to understand these words as originating in Heaven.  Indeed, the unnamed bishop proved to be something of a prophet.  For in the year 386, God gave to St. Augustine the grace which caused him to convert definitively to the Catholic Faith.  And on Easter Sunday of 387, along with Adeodatus who died not long afterward, St. Augustine was baptized by the hand of the great bishop of Milan, St. Ambrose.

It was hearing about the saintly lives of some of his contemporaries and near contemporaries, such as St. Anthony of Egypt, which occasioned St. Augustine’s conversion.  These generous souls, who had given themselves entirely to Christ, showed St. Augustine what was (and is) truly possible with God’s grace and forced him to reflect seriously on his own miserable moral state.

Driven to tears and profound contrition for his sins, St. Augustine describes in his Confessions his conversation with God: “Not indeed in these very words but to this effect I spoke many things to you: ‘And you, O Lord, how long?  How long, O Lord, will you be angry forever?  Remember not our past iniquities.’  For I felt that I was held by them, and I gasped forth these mournful words, ‘How long, how long? Tomorrow and tomorrow?  Why not now?  Why not in this very hour an end to my uncleanness?’”

God responded to this prayer through the voice of a child which St. Augustine heard from a nearby house.  The voice kept repeating the words, “Take up and read.  Take up and read.”  St. Augustine tells us of his immediate reaction to these words: “I checked the flow of my tears and got up, for I interpreted this solely as a command given to me by God to open the book and read the first chapter I should come upon.  For I had heard how Anthony had been admonished by a reader from the Gospel at which he had chanced to be present, as if the words read were addressed to him: ‘Go, sell what you have, and give to the poor, and you shall have treasure in heaven, and come, follow me,’ and that by such a portent he was immediately converted to you.”

The book in question was the one St. Augustine had most recently held in his hand, namely, his volume of St. Paul’s Epistles.  Opening it, the first line which his eyes fell on was from Romans: “Not in rioting and drunkenness, not in chambering and impurities, not in strife and envying; but put you on the Lord Jesus Christ, and make not provision for the flesh in its concupiscences.”  St. Augustine tells us what happened next: “No further wished I to read, nor was there need to do so.  Instantly, in truth, at the end of this sentence, as if before a peaceful light streaming into my heart, all the dark shadows of doubt fled away.”

When St. Monica heard from her dear son this story of his conversion, she was completely overjoyed and blessed the Lord.  In St. Augustine’s words to God, “She saw that through me you had given her far more than she had long begged for by her piteous tears and groans.”  In saying this, St. Augustine had in mind that God had given to her a son who had completely dedicated himself to the Lord through renouncing the goods of this world.  Yet, this bishop of Hippo’s words would prove to be prophetic, as did those of the unnamed bishop years before.  For it was precisely through her “piteous tears and groans,” which she quite literally poured out for decades for her wayward son, that God would transform both St. Augustine, “the son of such tears,” and St. Monica herself into two of the greatest Saints that the Church has ever known.

PrevPreviousHow To Feel Good and How Not To: Contemplative Delight
NextHelping Family in FaithNext