The Devil is Afraid of Me 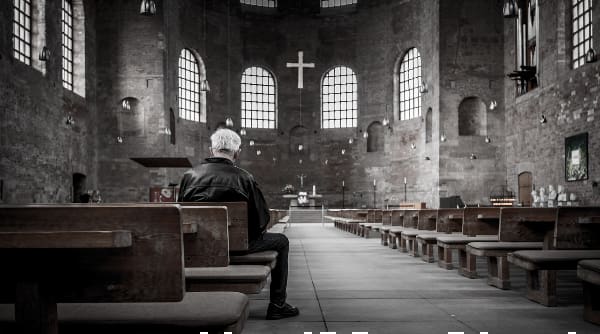 “The Devil is Real”: Insights on Spiritual Warfare from Fr. Gabriele Amorth

Fr. Gabriele Amorth was the most well-known exorcist of our time, dedicating decades of his life to minister to countless people. Along with his ministry as an Exorcist, Fr. Amorth offered his insights through numerous interviews and books.

The following are selections from Fr. Amorth’s interviews, which are collected in the book The Devil is Afraid of Me: The Life and Work of the World’s Most Popular Exorcist. They address the reality of the Devil and the promise of defeating evil through the grace of Christ.

Questions and Answers with Fr. Amorth

They say that one should not speak so much of the devil. Is the devil spoken of too much?

Pope Francis spoke of the devil in his first ten discourses, and he speaks of him often. Furthermore, he has consecrated the Vatican to St. Michael the Archangel, in order to defend it from the Evil One. But, apart from this, the devil is not spoken of too much; it is necessary to do so more. All priests should speak of him continually.

So many, even in the Church, do not believe in the action of the devil? Why is this?

This is so. They do not believe in the existence of the devil or in his actions. But I insist on an extremely strong phrase spoken by Jesus Christ: “Who is not with me is against me” (see Matt. 12:30). Since Satan is against Him, it is as if He is saying: “Who is not with me is with Satan.” There are no half measures. Either one is with Jesus, or one is with Satan. Even if one believes a little in the devil and does not believe in the words of Jesus, one is with the devil. Scripture, especially the Gospels, and the Fathers of the Church speak repeatedly of the devil and of his action in the world.

Why does the devil still rage in the world, since the world has been consecrated to Our Lady, who has asked the people to fulfill the practice of the first Saturdays of five consecutive months?

The world is under the action of the devil because the world is far from God: the people do not confess their sins, they do not go to church, and they do not believe. Few put into practice these devotional acts; they are a minority. This explains why the devil tramples man in the world.

Several persons complain of being victims of curses and of not being able to liberate themselves from the effects of the spell that these produce in their lives. Can there be curses, then, that are not concretized in possessions?

A curse always becomes a vexation, and exorcisms are done even if there is only a vexation, which is an evil influence. The Cat­echism of the Catholic Church is clear: an exorcism is done even when there is no possession.

But some exorcists, if they do not see that there is possession, do nothing.

They are mistaken. If there is a vexation, that is, an evil influ­ence, the Catechism says that an exorcism should be done.

Can the demons manifest themselves in dreams?

Rarely, but it is possible. One recognizes it from the fear that it causes the person. But if one invokes the name of Jesus or Mary, it goes away.

And when someone has been subjected to a spell, other than following a correct sacramental life and getting exorcisms or prayers of liberation, what else can he do?

Heartfelt forgiveness toward the one who did this evil is the basic requirement. If there is no heartfelt forgiveness and one is subjected to exorcisms, God does not liberate. At times, I am made to understand that the exorcisms on a particular person are not having any effect, and I ask this person: “Have you forgiven the one who did this evil to you?” “No.” And then enough with the exorcisms. One must at least make an effort to pardon the one who has done evil to us.

You often speak of the importance of consecrating oneself to Our Lady, the Virgin Mary. Do you renew your consecration in your daily prayers?

Yes, I do it daily. It is not an obligation; the important thing is to put one’s life and all one’s actions under the protective mantle of the Virgin Mary, entrusting oneself to her, trusting in what the Lord sends us. She said: “Let it be done unto me according to your word.”

Could you say something about the use of sacramentals in exorcisms? I am referring to water, oil, and blessed salt.

Each sacramental has its own characteristics. The prayer in Latin clarifies their meaning. These three sacramentals are used to liberate us from the influence of the demon. The blessed salt, for example, gives special protection to places. Father Candido recommended put­ting a little bit of blessed salt in a room that is considered infested.

The blessed oil has the power to cure ills and chase demons. During an exorcism, I use the first Ritual, which includes the possibility of anointing the possessed with oil. I anoint the five senses: the forehead, eyes, nostrils, throat, mouth and ears, trac­ing on the possessed the Sign of the Cross. I repeat, a gesture must be done with faith in order to be effective. Two Russian saints — whose names I do not recall — chased demons by anoint­ing [the afflicted] with blessed oil. They were not exorcists. They did not use the Ritual. But they were saints; they prayed, and they chased the demons.

Blessed water is used for blessing places and persons. One can also drink blessed water, but with faith, taking little sips. Some of the principal effects are liberation from the snares of the Evil One and protection from him. Also, for us exorcists, it is worth recalling Christ’s announcement: “Those who believe: in my name they will cast out demons.” Consequently, if a priest has the authority to do exorcisms and to act in the name of the Church, it is because he has faith. When I find myself administering an exorcism, I always ask the Holy Spirit to come to my aid. Without Him, my intervention would be fruitless.

Have you ever been subjected to a “joke” on the part of the devil?

I recall an episode. Once, after much time exorcising a person, the demon began mocking me. He said he would abandon the person on December 8, the feast of the Immaculate Conception. That day, for the first and only time, helped by Father Giacobbe, I did an exorcism for five and a half hours. At the end, the pos­sessed seemed to be liberated! There were tears, embraces, and immense satisfaction. I recall going to my confreres and saying: “We liberated a person from the devil!”

But after a week, we were back where we were before the exorcism. Father Candido said: “It is useless to do long exorcisms. It does not serve any purpose!” I asked the demon why he did not go away on that day, and he responded: “Don’t you know that I am a liar?” I can assure you that I felt humiliated by that demon!

This article is adapted from a chapter in The Devil is Afraid of Me by Fr. Gabriele Amorth which is available from Sophia Institute Press. PrevPreviousThrough the Heart of St. Joseph
NextSt. John Paul II and Pastoral Ministry as a GiftNext