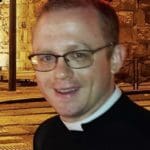 On Praying and Fighting Against Evil One of the most formative experiences in my own journey with the Lord was an opportunity I had to go to the Holy Land on a twenty-four-day pilgrimage for seminarians with the Equestrian Order of the Holy Sepulchre US Eastern Lieutenancy in July – August 2011. During our second tour of the city of Jerusalem on the evening of August 8, 2011, a few seminarians, our priest-chaplain, and I decided to do an all-night prayer vigil one night in the Church of the Holy Sepulchre, which is built both over Golgotha where Jesus was crucified as well as the Tomb of the Resurrection. This is the holiest church in all of Christendom. Since the mid-1800s, the church is locked up by a Muslim family as well as Catholic and Orthodox monks in an elaborate ceremony called “the status quo.” To do the prayer vigil here, one is instructed that they must literally stay awake from the hours of 9:00 PM to 5:00 AM when the Church is reopened. One cannot go to sleep during this time, but one is free to bring a Bible, rosary, prayer books, and bottles of water to help them stay awake and hydrated.

One of the Franciscan Friars of the Holy Land said to our group that as soon as we are locked in for the prayer vigil, we should go immediately to pray at the Tomb of the Resurrection. The reason he gave was that if we waited too long to do this, the Greek Orthodox monks at the Church would throw us out because they usually do their Divine Liturgy there at Midnight. By the time I entered the Tomb of the Resurrection to pray, I had it all to myself. I then made a Holy Hour there before the slab where Our Lord himself rose bodily from the dead, conquering sin and death, and restoring humanity to the loving embrace of God the Father. I remembered meditating on each of the Resurrection accounts in the Gospel in my prayer on my knees before this holy slab, and then praying to the Lord for my own journey toward the priesthood, to know and persevere faithfully in doing His will wherever He may lead me. I also prayed for my family and friends as well as other intentions people gave me. The tomb was mostly dark at this time, but there was enough light to read and to see what was in front of me.

At the end of the holy hour, I remember getting off my knees to walk out of the tomb, when suddenly I kicked something metal on the ground that was covered in darkness. I moved to see what the object was, and I grabbed it with my hands. Before I knew it, I was holding the metal of a Satanic pentagram that was left by someone in the Tomb of the Resurrection. I was horrified! It was around 11:30 PM at the time and the only people I could find in the Church outside the members of my own group were two Armenian Orthodox monks. One of the monks was an abbot wearing a hood reminiscent of that of Obi-Wan Kenobi from Star Wars. The other monk was a simple brother sitting at a table doing work. Bewildered and scared, I decided to bring them the Satanic metal and I explained to them what it was. They began to talk in Armenian to each other. Suddenly, one of the monks took out a gigantic toolbox that he thudded on the table. I was thinking, “Uh oh, I am dead! They think I brought that medal in! They are going to cut off my hands!” Then that monk said something to me with great faith, trust, and strength that I would never forget. “Don’t worry, Satan does not have any power here!” He then proceeded to take a pair of metal clippers out of the toolbox, and he destroyed the metal of the Satanic pentagram right in front of me, shredding it into tiny, unrecognizable pieces. I then proceeded to go to the holy water font in the Church of the Holy Sepulchre, where I thoroughly washed my hands with holy water while praying the St. Michael the Archangel prayer like I was cleaning heavy grease off dishes and pans after a long night of cooking food at a restaurant.

Don’t worry, Satan does not have any power here! In our age of history, both within the frail humanity of the Church and even at times within my own heart, it can seem that evil is present very clearly and subtly like that metal of the Satanic pentagram that I found in the Tomb of the Resurrection. I can be not only frustrated by it in my struggle to fight against it, but at times I can feel seemingly powerless to stop it and full of both fear and anger in the light of its influence. Thus did the Apostles feel that way when they saw Jesus betrayed and in their abandonment of him while he was tried and crucified. I can face that same fear when we see betrayals and failures by those who pastor the Church or by close family and friends. I can feel worn out after repeated attempts to fight against a particular temptation to sin or spiritual desolation and I relapse and fall back into that action that I sought to avoid. I can be filled with fear as I see evil with my own eyes around me or experience its allurements and wounds within my own heart.

If the work of our sanctification presents, apparently, the most insurmountable difficulties, it is because we do not know how to form a just idea of it. In reality, sanctity can be reduced to one single practice, fidelity to the duties appointed by God. Now this fidelity is equally within each one’s power whether in its active practice, or passive exercise. The active practice of fidelity consists in accomplishing the duties which devolve upon us whether imposed by the general laws of God and of the Church, or by the particular state that we may have embraced. Its passive exercise consists in the loving acceptance of all that God sends us at each moment. (1)

Knowing my first responsibilities of the moment that are directly in our control, and then knowing those things that are outside my direct control and placing them in the hands of God the Father, is so important in the battle of faith. This keeps my heart open to responding to the actions of his grace even considering the evils afflicting me both internally and externally. Reginald Garrigou Lagrange also stresses that “we must abandon ourselves to God in all that concerns the good will or the malice of men.”(2)  I may not see immediate results in this strategy but in the timing of God’s providence, he will allow the wheat of His grace to overcome the weeds of sin and evil that seek to render them fruitless (cf. Mt 13:24-30). God never permits an evil except in view of some greater good. Even evil, which is not of God and is always the distortion of his creation and saving plan, can be used by his power to bring about the completion and perfection of that plan according to His providence. (3)

Yet how do I fight against evil in prayer? Often when I hear the petition in the Our Father, “deliver us from evil,” I can immediately fixate on the first apparent meaning of that petition which is “Lord protect me from evil.” Yet that petition also implies two other meanings, “Lord free me from evil,” as well as “Lord destroy and defeat evil, insofar as it is beyond my ability.”(4) When I see the influence of evil go beyond my control even affecting those in authority over me, it is always important that I truly love those who do evil (cf. Mt 5:44; Lk 6:36). Love in this sense should be understood as willing the good of the other in the sense of their salvation, perfection, and sanctification as God desires to bestow it on them. (5) Then I am to pray for them that they embrace the graces of conversion and do the will of God in their life for the end of their salvation. Yet even after that, should I continue to recognize a malicious intent or presence, then I am called to pray not only for their freedom for such evil but also that the Lord defeat and destroy such evil intentions or plans in so far as they hinder His saving will (Ps 109). Yet before I can pray that petition for them, I must pray this same petition for myself in my own complacency with sin and evil in my own heart.

In seeking to embrace and abandon ourselves to the providential care of the Lord in such prayer, I will be loving with His heart and truly embracing the call of authentic love that goes beyond vitriol and fear and knows how to act, yield, and fight. (6) This is the love that motivated Moses to stand in the breach before God in prayer in light of the children of Israel’s own evil, sin, and hardness of heart in violation of their Covenant with Him during their sojourn to the Promised Land. (7) This is also the same love Jesus showed on the cross when he said “Father, forgive them they know not what they do” and “Father, into your hands I commend my spirit” (Lk 23:34 & 46).

Don’t worry, Satan does not have any power here! When we are overcome by the wounds of personal sin and with frustrations at evils perceived, let us acknowledge our reality and frustration but that during this battle the Lord is with us fighting alongside us. May our hearts and our wills embrace the abandonment, trust, and faith that the Church prays in her prayers of exorcism rite when we find evil subtlety around us and even within the chambers of our hearts. Ecce Crucem Domini!  Fugite partes adversae! Vicit Leo de tribu Juda, Radix David! Alleluia! (Behold, the Cross of the Lord! Begone, all evil powers! The Lion of the tribe of Judah, The Root of David, has conquered! Alleluia!)

PrevPreviousThe Liturgical Year Sorts Out All Your Worries
NextSt. Gemma and Her Guardian AngelNext