The Crucifix Speaks to Francis 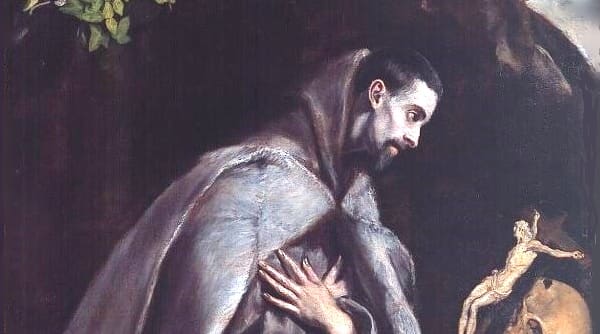 The Crucifix Speaks to Francis

Particularly dear to Francis was an ancient chapel long allowed virtually to  fall into ruins, dedicated to  San Damiano. In it hung a Byzantine wooden crucifix, painted in red, gold, and blue. It did not represent the tortured Christ of later art; but the large, open, dark eyes of the Crucified looked down with a haunting vividness. It was a striking example of the early painted crucifixes, and it is strange that it should have survived the neglect of the chapel.

Before it, Francis loved to pray for the light which would shine through the darkness of his mind. As he looked up one day, he saw the lips of the Christ move, and he heard the words, “Francis, you see that my house is falling down; go and repair it for me.” And Francis answered simply, “Willingly, Lord.”

How far Francis was from any notion of purifying or re- forming the Church is clear from his reaction. His literal mind understood the words in their most literal sense. He was in a crumbling church, and God was simply asking him to repair it. His thoughts must have flashed back to his boyhood when he had learned — or at least watched — the technique of building walls around his hometown.

The overpowering thing for him at that moment was that Christ — above all, the majestic, yet so human, figure of the Crucified in brilliant colors surrounded by saints — had spoken to him. He had obscurely known and heard God’s voice within him before, and it had given him the strength to kiss the leper, but in Francis’s mind, there was a whole world of difference between inner promptings, however certain, and what in daylight one could see, hear, and touch. Here at last was the authentic confirmation that  God was with him, instructing him about what here and now he should do. Others of different makeup might not need this outward sign. Francis, of all people, did.

Francis’s mind leaped at once to the outward sign which would symbolize the personal experience of God’s spoken word. Then he rushed to Assisi, entered his father’s shop, and took out of the stores a great piece of scarlet cloth, the finest available, fit for kings and princes. He jumped onto his horse, made the Sign of the Cross, and galloped off to the market of Foligno, the nearest trading center, for he could scarcely have sold it in Assisi without his father hearing of it.

There, in the always-busy marketplace and cloth fair, he quickly sold the cloth, and, mindful for a fleeting moment perhaps that the cloth was not really his to sell, he sold his horse as well. No doubt he at once regretted having done so, for now it would take him three or four hours to get back to San Damiano. Anyway, it was too late for regrets. The money he had acquired was sacred. It had paid for a royal cloth fit for the decoration of a church. He must be content to tramp back as fast as his legs would carry him.

“Now we can repair the church as God Himself would want it to be repaired,” he must have said. It is doubtful if the poor priest managed to get a word in, as Francis poured out his heart, his story, and a good deal of his life’s history, with perhaps a little treatise on economics as he understood them. Whatever the rights of private property, they manifestly could not weigh in the balance against God’s rights. Before the priest could interrupt, Francis begged that he might stay forever at San Damiano to serve God in God’s way.

Then Francis, perhaps only to get rid of the coins, some of them in his pockets, some lying about, collected them together and dropped them contemptuously on a windowsill.

As he was to tell his followers in one of those seemingly simple, but devastatingly pregnant, observations: “If we have money, we shall also have to have armed men to guard it.” The tragedies of civilized man are expressed in those few words.

At this moment, Francis’s father, Pietro di Bernardone, for the first and last time in his life, enters upon the scene as an actor with a major part to play in the drama which was, unknown to him, to be acted out before the eyes of all future generations.

Bernardone, it appears, was on his travels during this time. When he returned home to be told how his son, suddenly suffering from some kind of religious mania, had taken the richest cloth in his shop and sold it to get funds in order to repair an old country church, he completely lost his temper. Where was the boy anyway? Bernardone was told that  Francis was living with the chaplain at San Damiano.

Gathering together a party of friends, Bernardone set out for San Damiano to bring his son back through main force if necessary. A diet of bread and water under lock and key in the little prison-like strongroom of the house would put an end to all this nonsense.

But when the party reached the church, they found no Francis. Doubtless the frightened chaplain explained in detail all that had happened. The full truth was even worse than the rumors, but the father must have got some satisfaction from the thought that his son at least understood that he meant business. Clearly, terror had driven poor Francis away. Pietro, who knew his medieval rights as a father, could afford to bide his time.

Up to a point, Bernardone had judged well. Francis, the knight of poverty and of the crucified Christ, the man who had kissed the leper (which not another soul in Assisi would have had the courage to do) had indeed fled in terror. “Francis, who after all had only just become a knight of Christ, heard the threatening shouts of the party coming to find him. He held his ground until he could see them, and then ran away as fast as his legs could carry him, to hide in a cave he had prepared for the occasion. There he hid for a month.” So The Three Companions delightfully reports.

At length, so we are told, “relying entirely on the Lord and with an inner glow and with the clearest understanding of what he ought to do, he left his hole and hastened, steadfastly and joyfully, to Assisi.”

The crazy behavior of Francesco di Bernardone had slowly become the gossip of Assisi. Suddenly this generous, high-spirited, fashionable young man had become the butt of every tongue. The whole thing had become absurd and humiliating. The young fop had let everyone down. His old friends turned against him. Those who had envied him his success gloried in his humiliation. He had gone completely mad, or a devil had taken possession of him.

His friend must have told him of the feelings of the people of Assisi. Once more, Francesco passed from weakness to strength. It was a challenge. He must be ready to fight for his cause, for his Master, Jesus Christ, and for his fair lady, Poverty.

He must return to Assisi to fight the battle of the Lord as a true knight.

Suddenly, at the corner of a street in the town, someone saw him. For weeks now, he had been living on virtually nothing. Always thin and spare, the figure passing through the town was more like a scarecrow with its soiled clothes hanging around it. Could it be Francesco? The sun caught his face as he looked up. Yes, that was Francesco’s smile, although drawn now on a skeleton-like mask with an unkempt beard. It had the quality of the macabre.

Yes, it was Francesco. Francesco had indeed gone mad. Pazzo! (“Madman!”) The ugly word passed from mouth to mouth, and soon Francis was followed by a crowd of jeering Italians, crossing themselves or warding off the evil eye to avert the curse that had evidently fallen on him. The poor and the beggars were loudest in their jeering at this figure of fun, now more pitiable than themselves.

Bernardone, hearing the dreadful news that his son had actually returned to the town, a madman with the crowds mocking him, rushed out, seized his son, and dragged him into the privacy of his house. This was beyond all measure. Mad or not, the answer was a good flogging there and then.  Then, making use of the legal rights of those times when a son “misused his substance,” he threw him into the cell in his house, banged the heavy door, and drew the bolts.

It is hard to forgive Bernardone his brutality and stupidity, even though he was acting within his rights, but his behavior helps us to realize that the real Francis was a far odder and more difficult person than the pious streamlining traditions of hagiography allow. The fear that his son might escape and start another mob chase of the Bernardone lunatic must have been overwhelming for a respectable merchant. Let us hope, too, that he was not sorry to leave further responsibility to Pica, his wife. Pica, like any other good mother when faced with a desperate quarrel between father and son, went to plead with her son. But having doubtless tried to explain his father’s sheer frustration and asked her son to bear with him and try to behave a little more reasonably — one must remember, she had had to put  up with  Francis’s earlier extravagances in  an  opposite sense — she found herself listening to the whole story of what had been happening to her son during those last months. It did not take her long to realize that this was no play-acting, no new mad fancy of her boy’s unstable brain. Good Christian as she was, she understood that this was the real thing — a call from God, strangely as it seemed to be expressed in her son’s behavior.

Anyway, she left the door of the prison open for Francis discreetly to escape from home for the last time in his life and, unseen by the people, to return to San Damiano. If only Pietro had had so much common sense.

Francis, living with the priest at San Damiano a life akin to that of a religious oblate — this was shortly to prove important — hoped to be left alone until God showed him the way forward more clearly.

This article is adapted from a chapter in Francis of Assisi by Michael de la Bedoyere which is available from Sophia Institute Press.