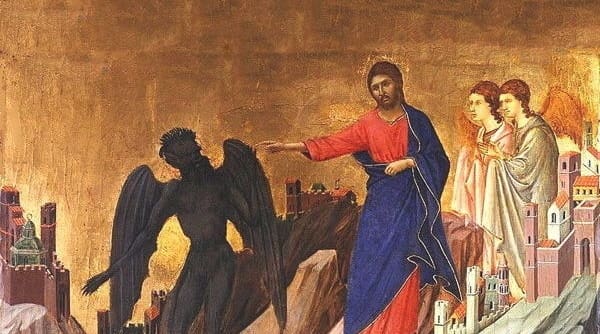 Some persons, much subject to temptations, lament the time they spend in resisting them. “I cannot,” they say, “preserve recollection. When I try to meditate, to recite some prayers, to spend a few moments in the presence of the Blessed Sacrament, I cannot fix my mind on God. That is the very time that temptations come to assail me; and I pass it in a vain endeavor to banish them. I meet these troublesome and obstinate visitors even at the holy table, when I go to receive my Lord and my God. What profit can I expect from pious exercises performed in such a manner?”

This thought brings great discouragement. To cure this, to reassure and console such persons, it is important to recall to them the principles by which to correct their error and the advantages of such a state when borne as it should be.

It is a maxim universally acknowledged that we are not called to serve God according to our feelings and inclinations, but in the way that He requires and according to His goodwill. God attaches His graces and rewards not precisely to the good works that we prescribe for ourselves but to those that He authorizes and enjoins.

Based on this principle is the decision that, if obedience prescribes an employment that keeps us from prayer or meditation, by performing the action in a spirit of recollection, we please God just as much as if we had spent the time in communion with Him. And if we were to omit the action for the sake of praying or meditating, we would not be serving God as He requires; we would offend instead of serving Him.

This principle should suffice to convince you that you do not lose the time that you pass in resisting temptations that occur during your exercises of piety. The devil has no more power over men than God allows him. It was only by an express permission that he was enabled to subject the patient Job to so many trials and temptations. God permits this state in which you find yourself; and as distractions are a species of temptation, you must apply to them what I have just been saying.

How then does God wish that you should serve Him? Is it by a sustained and uninterrupted meditation on holy things? Is it by tender colloquies with Him that no earthly affection shall be allowed to disturb?

No. He wishes you to serve Him by a faithful and persevering resistance to all the inspirations of the enemy, by which he strives to seduce and separate you from the divine love; that, like the Jews rebuilding the walls of Jerusalem, one hand should grasp the sword of defensive warfare while the other labors to erect the spiritual edifice of perfection in a sentiment of lively faith and unshaken hope (Neh. 4:17) — a hope, I mean, unshaken in your will, however it may seem to waver in your imagination.

Has such been your fidelity?

Then you have done the will of God; you have honored Him as He required; you have put Him above everything else; you have in your submission and patience and fidelity in resisting temptation been as pleasing to Him as though you had been occupied in an ecstasy of fervent prayer distinguished by the most affectionate sentiments.

Conformity to the Will of God

I ask you, how can that time be lost that is spent in conformity to the will of God and in the exhibition of so marked and solid an attachment to Him? After such an exercise, in which you have courageously resisted all the attacks of your enemies, you should be as well satisfied as if you had performed it in the greatest recollection and tranquility. It had less savor and sweetness, but the fruit was all the richer.

You have done the will of God, and He will acknowledge it in the graces with which He will enrich your soul. The accomplishment of that will was painful; the pain will not be forgotten in the recompense. The Holy Spirit assures us by the mouth of the Apostle: “God is not unjust, that He should forget your work, and the love which you have shown in His name” (Heb. 6:10).

The time, therefore, so employed is not lost, not only because we render God the honor and service that He asks at our hands and in the very way He asks it, but also because in these combats we acquire merits that are being multiplied in every minute. Persecutions that increased the sufferings of the martyrs enriched their crown of triumph; temptations are a persecution that has the same effect in a faithful soul.

The Holy Spirit declares him blessed who “could have transgressed, and hath not transgressed; who could do evil things, and hath not done them” (Ecclus. 31:10 [RSV = Sir. 31:10]). His happiness is proportioned to the merit that he amassed by his perseverance.

On this principle, when you observe the law of God and do His will in a way that is displeasing to nature, you acquire a double claim to reward: first, you have obeyed, and secondly, you have obeyed with difficulty and against resistance and combat. The sac­rifice you have made of the natural inclination that solicited and impelled you is rewarded here by new graces and hereafter by an increase of eternal glory and happiness.

Remain Steadfast in Clinging to God

Following up this reasoning, what an immense treasure of merit that person accumulates who, assailed by all kinds of temptations, is steadfast in clinging to God! He is certain that every sacrifice was noted: every one had its merit; every one shall have its recompense. On each separate occasion that he resisted temptation, it could be said of him, “Blessed is he, for he could have transgressed, and hath not transgressed; he could do evil things, and hath not done them.”

And what a vast number of sacrifices are made by that one who, often drawn and urged by passion, constantly resists its seductions and refuses the object that it presents to his concupiscence. Few moments pass unmarked by victory. The repeated and varied assaults of the enemy serve only to swell the number of victims that the faithful warrior immolates to God. What a treasure of merits in these hand-to-hand struggles with passion!

We do not ourselves perceive every sacrifice that we make, but the all-seeing eye of God does not suffer one to escape. Is anything more needed to console us in this state and to encourage us to perseverance?

If the contest is severe, the crown is brilliant; one minute of pain and an eternity of glory! And who would wish to exchange eternal glory for a minute’s gratification?

Nor is the merit restricted to these repeated sacrifices; new treasures are found in the interior virtues practiced at such a time. We feel very well that we cannot maintain successful resistance without the aid of heaven, without the light and the motives of faith, the inspirations of hope, and the support of divine charity. Our heart is occupied in a continual exercise of prayer and in forming repeated acts of these exalted virtues. If only one act of divine charity is so powerful as to reconcile a sinner with God, how much merit does he not acquire who in his combats is constantly repeating this act!

What ignorance, then, to suppose that time so employed in resisting temptation is lost for heaven and perfection, when, on the contrary, it is evident from what has been said that we are laboring most actively to practice the one and gain the other!

This article is an excerpt from Temptations by Rev. P.J. Michel and is available from Sophia Institute Press. Art for this post on resisting temptations: Cover of Temptations used with permission. Temptation on the Mount, Duccio di Buoninsegna, 1308-1311, PD-US author’s life plus 100 years or less, Wikimedia Commons.