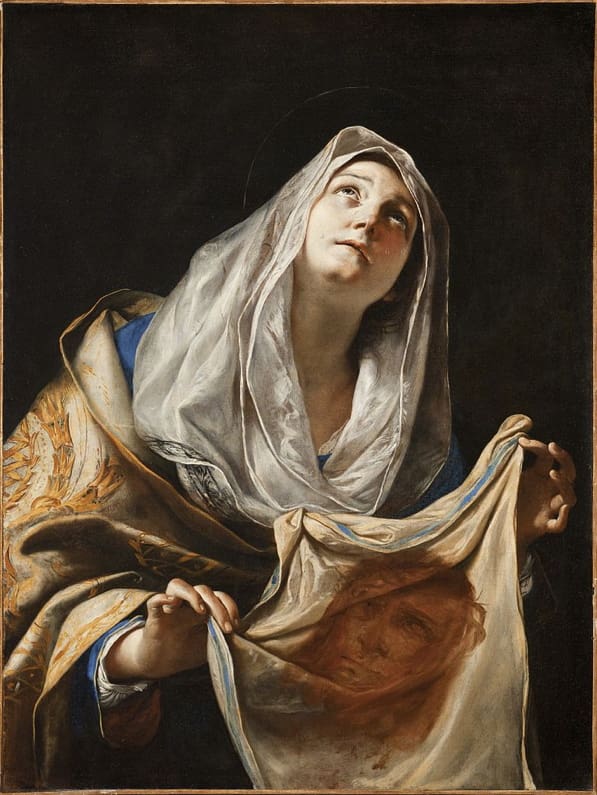 Veronica could not compete with the roaring, raucous mob,
Though no one heard her plea to move, she pushed with one last sob.
Compassion and persistence had begged her try again,
And just that quick she found herself before the Man condemned.

It’s then He fell beneath the cross that forced Him to the ground,
Which ripped His skin and tore His face; head pierced by thorny crown.
Blood mixing with the dirt and stones, they spit upon Him too,
This cursed Man whom they reviled, as winds of hatred blew.

But quickly moving to His side she felt a sudden chill
The world around her disappeared and time itself stood still.
She slid her veil from off her head, and with it cupped His face,
A touching act of mercy in response to heaven’s grace.

Then as she pulled the veil away, a tear ran down her cheek,
His look of love made her cry out and made her knees grow weak.
His sacred eyes, His Holy Face, His body racked with pain,
A memory she’d not forget long after He was slain.

A soldier then wrenched her away into the screaming crowd.
She pushed and shoved her way through them, heart pounding with head bowed.
At last she found a quiet street, and knelt in shear relief.
The bloody veil clutched to her chest; she cried from fear and grief.

Then as she held the veil she saw the imprint of His Face,
Majestic in Its blood and wounds; the source of every grace.
The Image burned upon her soul, she found she could not speak,
But bowed in adoration as she kissed her Savior’s cheek.

Veronica, O Veronica,
Such a pious deed you’ve done!
Upon the road to Calvary, a crown you’ve surely won. Donna Sue Berry is a passionate writer and poet, wife, mother of two, and grandmother of nine, from the American Heartland of central Oklahoma. She and her husband Joel share their time between Oklahoma and Montana. Her early writing began with romantic poetry during junior high school years; but, not until returning to school at age 48 did her poetry deepen to truly express her great love for her Catholic faith. Proud of her rich Oklahoma heritage and ancestors who made the 1889 Oklahoma Land Run, her current book project is "Catholic Poems from the Heart of a Red Dirt Oklahoma Girl." Her website is https://catholicpoemsfromtheheartofareddirtoklahomagirl.com.
ALL POSTS