How can a woman build appropriate relationship with a priest? Dear Father John, I am a woman working hard to deepen my relationship with Christ. In this process, I have begun to befriend priests. I wonder how you would suggest molding relationships with clergy to maintain detachment yet create mutually beneficial relationships. 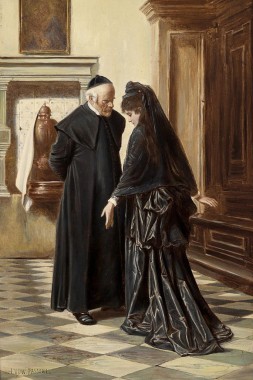 This is a real issue. We have all read or heard about tragic tales of priests having affairs with married or single women whom they were directing spiritually. And many times, both the priest and the woman are upstanding members of the parish, honest and fervent Catholics. None of us wants that to happen.

Two concepts can, I think, help answer your question and shed some light on the situation: realism and respect.

We have all got to be realistic. People are people; men are men; women are women. This doesn’t change when a woman begins to seek holiness. This doesn’t change when a man becomes a priest. Neither chastity nor celibacy is maintained and matured by pretending that certain circumstances will remove all temptation. And temptation can be especially subtle precisely in the midst of a relationship that begins on a deep spiritual level – the level where a priest and a female directee are interacting.

In this relationship, the woman receives affirmation and guidance regarding the living out of her faith. This can be deeply satisfying. The emotional release and joy that overflows from spiritual growth can lead her, little by little, often subconsciously, to depend on the priest not only for spiritual support affirmation, but also for emotional support. Temporarily, in moments of crisis, this can be fine. But if it becomes habitual, the emotional momentum can easily, and tragically, begin to override the spiritual connection, and the chaste relationship can be compromised.

A similar dynamic can happen from the priest’s perspective. If he feels a natural attraction towards a particular female directee, he can begin enjoying and looking for the emotional connection that he feels when interacting with her. He may look for it consciously, or subconsciously. At this point, his purity of heart is already being threatened, and he is vulnerable to temptation. If he then enters a period of personal difficulty or spiritual dryness (and this happens periodically – it’s normal), he will feel drawn to look for tangible comfort and understanding, instead of courageously bearing his cross and renewing his faith-commitment until the storm passes. At that point, going to a female directee with whom he is already emotionally involved will seem like a direct, clear, and satisfying solution.

The most obvious application of this concept is that women need to develop faith-based friendships with women where they receive emotional support. They should be very clear about what they seek from their relationships with priests: spiritual support and guidance, encouragement and instruction in their faith and in their pursuit of holiness. Priests need to have faith-based friendships with men, preferably brother priests, wherein they receive their emotional support. They must take seriously their role as spiritual fathers in relation to the people God gives them to serve.

This doesn’t mean that priests and women can’t be friends. What it means is that this particular friendship has a specific character and purpose, and that needs to be acknowledged and accepted.

By the way, this complex dynamism is often at work in relationships between lay people too, relationships that can lead to adultery. We can never pretend that we are immune from temptation, that we have conquered perfectly and forever the beautiful, powerful, and fruitful virtue of chastity. We need to be realistic.

As a result, in all interactions between women and priests, each party must have and show respect for the other’s calling in life. This starts in the heart: being brutally honest with oneself about emotional charges and attachments as soon as they begin to appear. But it has a lot of practical manifestations too. A good rule of thumb is to avoid situations where outsiders could infer the appearance of something unhealthy. Here are some practices that have been common in Church tradition, and that even married Protestant ministers (like Billy Graham) have found helpful:

I am sure we could each extend the list. And, again, similar respect should govern other relationships too – a single man and a married woman, for example.

I want to be explicit about the reason behind this mutual respect. It is not because the Church considers femininity intrinsically evil. It is not because the Church considers sex intrinsically evil. On the contrary, it is precisely because the Church herself respects the reality of gender in God’s plan and the sacredness of sexual intimacy that chastity is valued in the first place. But the Church is not naïve. We live in a fallen world and bear a wounded human nature. Therefore, we must make a conscious effort to be faithful to God’s plan for our lives. When it comes to relationships between women and priests, that conscious effort must include sincere respect for God’s plan for each person.

Art for this post on How Can a Woman Build Appropriate Relationship with a Priest?: Ein ernstes Gespräch (A Serious Conversation), Ludwig Johann Passini, by 1902, PD-US author’s life plus 100 years or less, Wikimedia Commons.