From Light to Darkness: Park 41 Mini-Course on Prayer 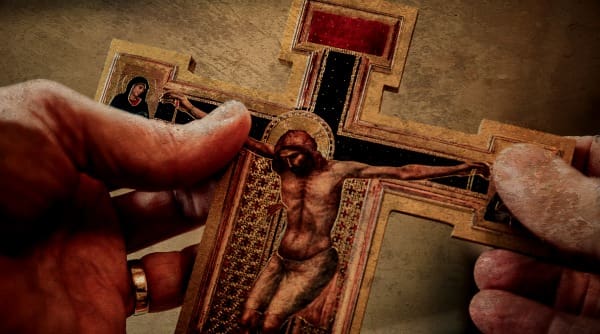 Editor’s note:  David Torkington continues his series on prayer with the fourth and final section, “From Meditation to Contemplation”.  Read part 40 here, and begin with part one here.

Without any human help, it was my own desperate need to find God that enabled me to persevere in the Dark Night in which I found myself when first fervor left me flat. However, in case I give the impression that first fervor is of little consequence and can easily be bypassed, this is not the case. First fervor is essential, for it is where that primordial desire to love and be loved is set ablaze to support and urge the would-be mystic onwards when, as St Teresa of Avila put it, ‘the well runs dry’.

Deep Down Beneath the Dross God’s Love Resides in Us

In order to drive home my point, let me give a brief synopsis. God’s glory is the expression of his inner self, which is, according to St John, Love, where the Three in One endlessly give their all to each other. When we say that we are all created in the image and likeness of God, we mean that deep down beneath all the dross God’s love resides in us, inspiring and suffusing our weak human love with his. This is what I am referring to when I speak about a deep primordial yearning to love and to be loved that can only be ultimately satisfied in the Three in One. This primordial yearning might find a brief satisfaction in experiencing God’s glory made matter and form in the works of his creation, or in the artistic masterpieces of those who try to portray it in their works. Most people can reach out to and experience God’s love in the love they have for another human being in whom his presence resides. True human love is the flashpoint when the primordial love that has been suffused by the divine in both partners draws and then bonds them together. However, all are called to union with the love of God, for that is our final destiny.

The Importance of First Fervor

The powerful and all-absorbing love that gripped me in my first enthusiasm was not just an emotional extra that could be bypassed, but a vital part of the rite of passage. Here, the primordial yearning for God is brought to a fever pitch and so strengthens the traveler for the journey ahead where selflessness would have to be learned if the fullest and deepest possible union is to be attained. For married couples too, the early emotions and passions that bond them together are of great importance to strengthen and support them when they subside. The selfishness that is in both of them has to be overcome in the years ahead if they are to find the fullest and deepest possible union with each other. In the last eighteen months of their lives together my father told me that he was more deeply in love with my mother than ever before, even more than in those early days when the fires of first love burnt so intensely.  But it was evident to me and others who knew them that it was the strength they also received from seeking another Love, too, that made possible something that would be impossible without it.  There is another aspect of first fervor that St. Teresa of Avila mentions.  She suggests that it is in a sense a sort of premonition of the Mystical Marriage when after purification in the dark night, the emotions and the feelings have been sufficiently purified and refined they can take us up into the glorified body of Christ, in, whom and through whom we come to contemplate the glory of God.

The Pearl of Great Price

When I found myself in a spiritual desert with no oasis on the horizon, I had never heard of St. John of the Cross or St. Teresa of Avila or any other mystic for that matter, with the exception of St. Francis of Assisi whose life I was reading. What impressed me was his simple but compelling logic that he received from the Gospels that he knew by heart. When he read that St. John, his favorite evangelist, said that God is love, and realized that this love was at all times ready and available to all who would receive it, he simply gave up everything else to seek it. It seemed the obvious thing to do. Jesus said that when you find a pearl of great price or a treasure hidden in a field then you would sell up and give up everything else you have to obtain it. Is there any pearl greater than its creator or any treasure more precious than his love? The radical logic that seems to be lost on us galvanized St Francis into action, and that action was to give up all else and seek out the solitude for the prayer that would enable him to receive the love that continually pours out of God. What moved me next was that although he initially experienced the excitement of first fervor as I had, he also was plunged into darkness.

After several months of praying daily in local churches, his endeavors took such a toll on him that his friends did not recognize him. So it was thanks to St. Francis that I was persuaded to keep giving the same time to prayer as I did before. That is all the help I had, and in retrospect, it was all the help I needed if I could not find a spiritual director to help me.  If a well-wisher had advised me not to worry and that resurrection would be coming soon and had given me St. Teresa’s Interior Castle, it would have been a hindrance rather than a help. Why? Because it might have encouraged me to journey on,  not for  God’s sake and for him alone, but for what I hoped to get out of him in the way of profound mystical experiences. I would not become a selfless lover but a cupboard lover.  When writing about mystical experiences in the early Church I said they were never emphasized, nor were they by later mystics, most especially St. Francis. Even though we know St. Paul experienced them he never boasted about them or set them up as the rewards that are given to those who pray. He endlessly preached ‘Christ and him Crucified’.  It was the same Christ for whom St. Francis gave his all and wept so copiously that it damaged his health.

The Reason Why Interior Castle was Written

Whatever graces we do receive in prayer are received not because they are sought, but because they are the consequence or byproduct of giving our all to God, for his honor and glory, not our own. Emphasizing spiritual goodies can be counterproductive, nor was this the reason why St. Teresa detailed them in her great masterwork, Interior Castle. There were so many heresies similar to Quietism in her day and so many ignorant spiritual directors that St. Teresa decided to detail the psychological experiences that were the genuine action of the Holy Spirit. When she was not there, or after her death, her sisters would not be frightened by what they came to experience or think it was the work of the devil, or become the pretext for ill-educated confessors to condemn them. Interior Castle was not written for everyone then, but only for her own sisters in Carmel and this should be borne in mind when recommending it to people at the beginning of their journey along the mystic way. I am grateful that I only read this masterly work later, and that it was St. Francis who inspired and encouraged me to journey on when I first entered the dark night.

Temptations to Give up Everything

Someone in me encouraged me to keep giving the same time for prayer that I gave before, despite the fact that I felt nothing and experienced nothing but distractions and temptations. The most powerful temptation of all was to give up this black and barren prayer and return to the prayer that had so exhilarated and excited me before. However, the truth of the matter is I simply could not try as I did. Then another temptation began to engage me and that was, not just to give up this empty form of prayer that seemed to be going nowhere, but give up the whole enterprise, leave the novitiate as several had done already, and go back to ‘normality’ in the ‘real’ world.

It was quite evident that just as nobody understood me at school because of my dyslexia, nobody understood me in the novitiate because of the new incomprehensible prayer that had engulfed me. I had to make a decision and I did. I would not leave but take my simple vows at the end of the year and then move to our student house at East Bergholt in Suffolk. This would give me three years in which to make a more mature decision, and give God time to decide whether he wanted me or not, at least that is what I thought. So, in the middle of September in that year I moved to the student house, full of apprehension.

PrevPreviousThe Visitation of the Blessed Virgin Mary, Feast
NextSolemnity of the Ascension of Our Lord: Forty Days After EasterNext