Fr. Jean-Pierre de Caussade, SJ: Abandon Yourself to this Book

Ignatius Press has just come out with a new edition of Jean-Pierre de Caussade’s outstanding work of spiritual direction, This work, written in 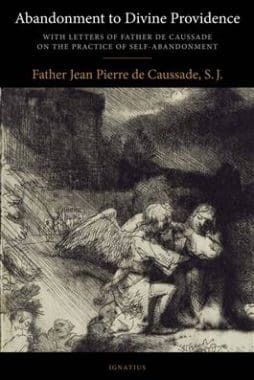 the 18th century by a French Jesuit, has become one of the great classics of Catholic spiritual reading. Not only does it deserve a treasured place in each person’s library, but it is well worth revisiting at various stages of spiritual growth.

The core of Fr. de Caussade’s approach is the insight that God reveals himself through the daily events, possibilities, restrictions, cares and sufferings of ordinary life, and that we can ensure rapid spiritual growth only by fully recognizing and accepting His merciful will in every situation. This, of course, is a common theme in all authentic Catholic spiritual direction, lodged deep in the mind of the Church. Some speak in terms of “resignation”, but Fr. de Caussade goes even further with the word “abandonment”, implying a relinquishing of our own wills in favor of a joyful perception of and total reliance on the will of God. His treatment of this topic is by far the most comprehensive we have in any one place.

I first used this book in an old reprint by TAN of the Burns, Oates and Washbourne edition of 1959, which itself was based mostly on four separate volumes published in the 1930s covering various portions of the material. Fr. de Caussade himself, of course, wrote in French. The difficulty with the various editions of his work is that he not only gave comprehensive spiritual direction to the Sisters of the Visitation in Nancy while chaplain there from 1733 until 1740, but he also followed up with numerous letters on personal questions and related topics after he had gone on to other assignments. Thus his entire spiritual doctrine is contained in a variety of conferences, retreat notes, and letters over a considerable period of time.

In 1861, some 110 years after the Jesuit spiritual director’s death, all of Fr. de Caussade’s writings were handed over to a Jesuit writer and editor, Fr. Henri Ramière. Fr. Ramière studied the work carefully, and organized it into a logical progression in one comprehensive book entitled Abandon à la Providence Divine which, owing to its tremendous value and popularity, has gone through many editions since that time. The Ignatius text is the E. J. Strickland translation of the 10th French edition, originally published in 1921 by Catholic Records Press. It is worth mentioning that the book has sometimes been published under the title of The Sacrament of the Present Moment, which gives further insight into Fr. de Caussade’s wonderful spirituality.

Fr. de Caussade treated the concept of abandonment both as a virtue to be acquired by all Christians, and as a spiritual state to which some souls are especially called. Both aspects are set forth in an initial treatise possessing significant theoretical depth. This treatise forms the first part of the book. But Fr. de Caussade also addressed many particular concerns, including questions raised by the various sisters, and of course he gave considerable counsel to the souls under his care in their varying stages of spiritual growth. Much of this is found in his letters, and all of this more practical material is organized into sections which form the latter portion of the book, “Spiritual Counsels of Father de Caussade.”

It is because his subject is treated so comprehensively, both in theory and in practice, marked by both particular questions and varying spiritual stages on the way, and divided between considerations of both the virtue and the state of abandonment, that Fr. de Caussade’s advice is so broadly applicable. Though prepared specifically for religious, who are doubtless more often called to what Fr. de Caussade described as the state of abandonment, the treatment of abandonment as a necessary virtue obviously applies to lay people as well. And the various stages of spiritual growth, along with the different problems encountered in these various stages, at least potentially apply to all devout souls, wherever they may be found.

A survey of the main sections of the second part of the book reveal something of its scope:

In dealing with the love of the virtue of abandonment, Fr. de Caussade considers it as a short way to perfection, happiness, peace and liberty. This leads to meditations on providence, community, dependence on God, God’s goodness, continued troubles, and good works.

In treating of the exercise of the virtue of abandonment, he touches on no fewer than thirty-seven points, including such things as general rules, useless fears, submission and confidence, simplicity, acceptance of duties, patience with oneself, and how to treat consolations.

The section on obstacles to abandonment addresses such problems as vanity, illusions, attachments, intemperate zeal, and discouragement.

In the remaining four sections, Fr. de Caussade covers similar particular points relating to aridities, weaknesses and weariness; trials, sufferings and privations; fear of the anger of God; the last agony and a mystical death.

This book is at once extraordinarily deep and wonderfully practical. It is superbly organized–subdivided into titled sections which generally run from just one to three pages, making the presentation perfect for daily spiritual reading.

As I indicated at the start, Fr. de Caussade’s work is one of the great classics of spiritual direction, holding a place in Catholic spiritual literature which is about as high as one can go without having been canonized and declared a doctor of the Church. For this reason, I have not tried to give a comprehensive explanation of Fr. de Caussade’s doctrine, as if it is something the reader must fully grasp before committing himself to it. It is enough that Catholic spiritual directors around the world have been recommending the book regularly now for some two hundred and fifty years. It has stood the test of time.

There are some concepts which, under whatever name, are fundamental to the spiritual life. Practicing the presence of God, for example, is one of these. And so is abandonment to Divine Providence–a simple yet profound idea which beckons all souls who love God. Not for nothing, for example, did Bishop R. Walter Nickless of Sioux City recently conclude a stirring pastoral letter on Church renewal by urging Fr. de Caussade’s insights upon all the priests, religious and laity of his diocese.

If you do not yet own or have not yet used this magnificent book, you should take advantage of the new Ignatius edition and purchase it. And if you have already gone through it some years past, you are probably now at a different stage of spiritual development, and so you may find it is time to make use of Fr. de Caussade once again. In fact, that is exactly what I intend to do.

PrevPreviousShould Spiritual Directors Charge for their Services?
NextWhat are the Most Tattered Titles on Your Nightstand?Next