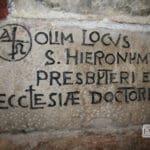 Did you know that St. Jerome is the patron saint of librarians and of translators? In Latin, his name is Hieronymus–which I love–and every September 30th, on the memorial of his death, translators around the world celebrate International Translation Day! How awesome is that?

Today, I’d like to show you to the cave in Bethlehem when he spent the last thirty years of his life, creating his magnum opus: translating Hebrew and Greek manuscripts into the Latin Vulgate Bible. The Church of St Catherine of Alexandria is named after St Catherine because it is believed to have been built over the spot where Jesus appeared to her and told her about her martyrdom (c. 310 A.D. The spiky Catherine wheel is named after her, although it didn’t end up killing her. She was beheaded.). The church is connected to Bethlehem’s Church of the Nativity–they actually share a wall–where it is believed that Jesus was born. The Church of St Catherine is the parish church for Bethlehem’s Catholics, where the Latin Patriarch celebrates Christmas Mass every year and where, with special permission, pilgrims can celebrate Christmas Mass year round! Jerome’s 4th-5th century monastery. In 1948, Antonio Barluzzi–the architect of the Holy Land–restored the church, creating the beautiful cloister that pilgrims encounter as they near the main entrance of the church. A statue of the Virgin Mary looks out at pilgrims from atop the main entrance, and below her, a statue of St Jerome guards the courtyard, a book in his hand and a skull at his feet, reminding us of his great work and of the transience of our human existence. The Church of St Catherine’s upper level is simple and modern. Above the sanctuary, a window depicts the Nativity, with St Francis and St Augustine looking on. Art adorns the surrounding walls: a painting of the Nativity shows angels and St Joseph adoring the newly born baby. A large bas relief called the “Tree of Jesse” depicts Jesus’ lineage from Abraham to St Joseph. At the top, Christ the King blesses the world. Down narrow steps, we encounter a series of caves. One cave is dedicated to the Holy Innocents killed by King Herod, while St Joseph’s Chapel is dedicated to Mary’s husband. The chapels of St Eusebius, St Paula, and St Jerome are all named after those who were buried in them. St Paula and her daughter Eustochium travelled with St. Jerome and helped him with his monastery. St Eusebius led the monastery after St Jerome’s death in 420 AD. He was buried here until the Crusaders took his body to Rome. Today, he rests at the Basilica of Santa Maria Maggiore.

St. Jerome is a great patron saint for those of us who love books and languages. He was born in 342 AD in a small town at the head of the Adriatic, somewhere in Croatia or Slovenia. His native language was the Illyrian dialect, but he learned Latin and Greek, and eventually Hebrew. He loved learning, and began building a library for himself when owning books wasn’t as easy as it is today. Every book he owned, he had to copy with his own hand! He was baptized in 365 AD, and in 373 AD he joined a colony of hermits in the desert east of Antioch–and not only did he bring his books with him, but he kept adding to his library!

He was ordained a priest in 379 and began his life as a Biblical scholar. In 385 A.D, he moved to Bethlehem. He finished his translation of the Bible in 404 AD, and in 416, his library was destroyed when Bethlehem was sacked by bandits. Boo.

St Jerome is believed to have been the second most voluminous writer in ancient Latin Christianity. St Augustine, the first, once said of him, “What Jerome is ignorant of, no mortal has ever known.” High praise! His library was considered to have been one of the most important private collections of the period, and he was known to have had an insatiable desire for knowledge, matched by an exceptional memory for everything he ever read. He is also known to have had a bad temper, which often came out when he was defending the Church.

Butler’s Lives of the Saints says of him: “Jerome was a strong, outspoken man. He had the virtues and the unpleasant fruits of being a fearless critic and all the usual moral problems of a man. He was, as someone has said, no admirer of moderation whether in virtue or against evil. He was swift to anger, but also swift to feel remorse, even more severe on his own shortcomings than on those of others. A pope is said to have remarked, on seeing a picture of Jerome striking his breast with a stone, ‘You do well to carry that stone, for without it the Church would never have canonized you.’”

St Jerome, pray for us!

PrevPreviousMy 20-year-old Does Not Receive Communion: What Should I Do?
Next2 Doctors, 2 Ways, 1 Goal: Sts Teresa & Therese (Part 1 of 3)Next